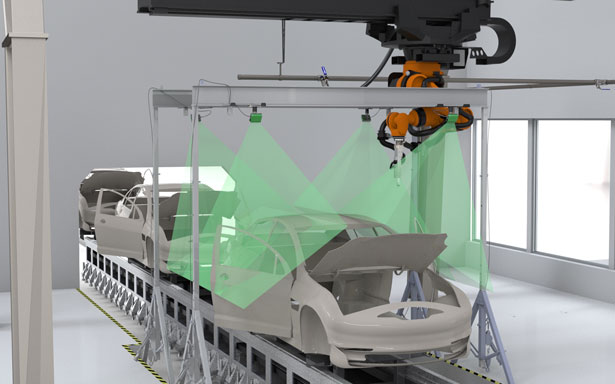 VPresence is not affected by ambient factory lighting, part color or reflectivity and requires no external lights, reducing faults and downtime.

VPresence is built to withstand punishing factory conditions and keep on working.

VPresence can dependably detect the absence or presence of complex parts under various circumstances.

Installation, operation, adjustments, and maintenance are quick, easy, and economical.

VPresence systems can be configured in an array of ways to meet diverse manufacturing applications and guard against costly and unexpected down time.

Before a manufacturing robot performs its next task, the system’s 3D volumetric sensors accurately detect:

FIND OUT MORE - GET A DEMO

We also make sure every component is robust enough to stand up to harsh factory conditions for the long haul.

Unlike other systems, ours are designed with the end user in mind. They are simple and easy to setup, use, change, and maintain. Our 24/7 service and support team is always ready to help.

Challenge – An automotive manufacturer needed to automate the process of opening the doors, hood, and deck on a car body, spray the body with top coat, all while the car is moving. There were several shortcomings when the robot and laser detection systems were installed. The customer could not guarantee the robots would consistently open the doors, hood, and deck all the way. Traditional laser detection involves a single laser emitter and receiver and if the receiver doesn’t detect the laser, it assumes an object is in the way. Using this traditional method would not work for the customer because it is difficult to install, it cannot tell the difference between a part or a person obstructing its view, it struggles to differentiate makes and models of vehicles, and is too likely to mistake a partially opened part as fully open.

Solution – Liberty Reach offered a functional solution with VPresence. VPresence uses multiple 3D volumetric sensors and RGB cameras aimed at each car part to create a surface map. The software then knows where to expect the surface of the parts and quickly verifies if the surface area is present. If the software does not find enough surface area of the part, a fault is produced and the line stops. VPresence is also versatile and has the ability to quickly and easily switch to different settings for each individual make and model of a vehicle.

Outcome – VPresence was successfully installed on 4 production lines in the manufacturing facility. The system included 4 sensors to detect 6 different parts. Without this system, the customer would have no reliable way to determine if parts were partially or fully open. Without Vpresence, this manufacturer ran the risk of disastrous robot crashes with time consuming and costly downtime.